This volume aims to explore the long-term evolution of different varieties of large enterprises in today’s developed economies. It focuses on the economic institution of business groups and attempts to comprehend the factors behind their rise, growth, struggle, and resilience; their behavioral and organizational characteristics; and their roles in national economic development. The volume seeks to enhance the scholarly and policy-oriented understanding of business groups in developed economies by bringing together state-of-the-art research on the characteristics and contributions of large enterprises in an evolutionary perspective.

While business groups are a dominant and critical organization model in contemporary emerging economies and have lately attracted much attention in academic circles and business presses, their counterparts in developed economies have not been systematically examined. This book aims to fill this gap in the literature and is the first scholarly attempt to explore the evolutional paths and contemporary roles of business groups in developed economies from an internationally comparative perspective. In doing so, it argues that business groups actually rose to function as a critical factor of industrial dynamics in the context of Second Industrial Revolution in the late nineteenth century. They have adapted their characteristic roles and transformed to fit to the changing market and institutional settings. As they flexibly co-evolve with the environment, the volume shows that business groups can remain as a viable organization model in the world’s most advanced economies today.

The Oxford Handbook of Business Groups provides a comprehensive analysis of business groups around the world. Business groupslarge, diversified, often family-controlled organizations with pyramidal ownership structure, such as the Japanese zaibatsu, the Korean chaebol and the grupos econmicos in Latin Americahave played a significant role in national economic growth, especially in emerging economies. Earlier variants can also be found in the trading companies, often set up in Britain, which operated in Asia, Africa, and Latin America.

Business groups are often criticized as premodern forms of economic organization, and occasionally as symptomatic of corrupt crony capitalism, but many have shown remarkable resilience, navigating and adjusting to economic and political turbulence, international competition, and technological change. Sixteen individual country articles deal with business groups from Asia to Africa, the Middle East to Latin America, while overarching articles consider the historical and theoretical context of business groups. 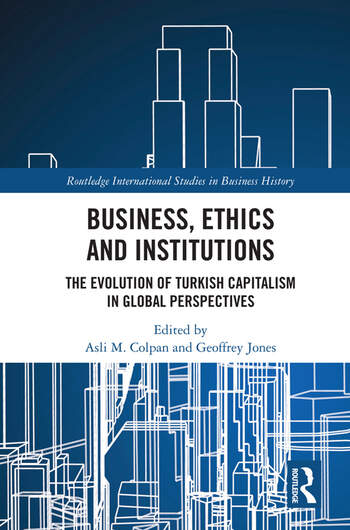 This book is the first systematic scholarly study on the business history of Turkey from the nineteenth century until the present. It aims to place the distinctive characteristics of capitalism in Turkey within a global and comparative perspective, dealing with three related issues. First, it examines the institutional context that shaped the capitalist development in Turkey. Second, it focuses on the corporate actors, entrepreneurs and business enterprises that have led the national economic growth. Third, it explores the ethical foundations and social responsibility of business enterprises in the country. The comparative and historical approach sets the volume apart from previous books on the subject.

Business, Ethics and Institutions aims to strengthen scholarly and policy understanding of Turkish capitalism and the diversified business groups which dominate the economy by providing a deep analysis of the evolution of political and social institutions which shaped corporate activity. It demonstrates the key role played by large family-owned business groups in Turkey’s development. It also seeks to identify both the similarities and the differences in the Turkish pattern of economic development, making comparisons with Japan, an early example of catch-up, and a more successful model than Turkey. The comparative perspective makes the book highly relevant to a wide range of scholars interested in the institutional foundations of modern capitalism and will be of value to researchers, academics, and students in the fields of business and economic history, ethics, organizational studies, and entrepreneurship.